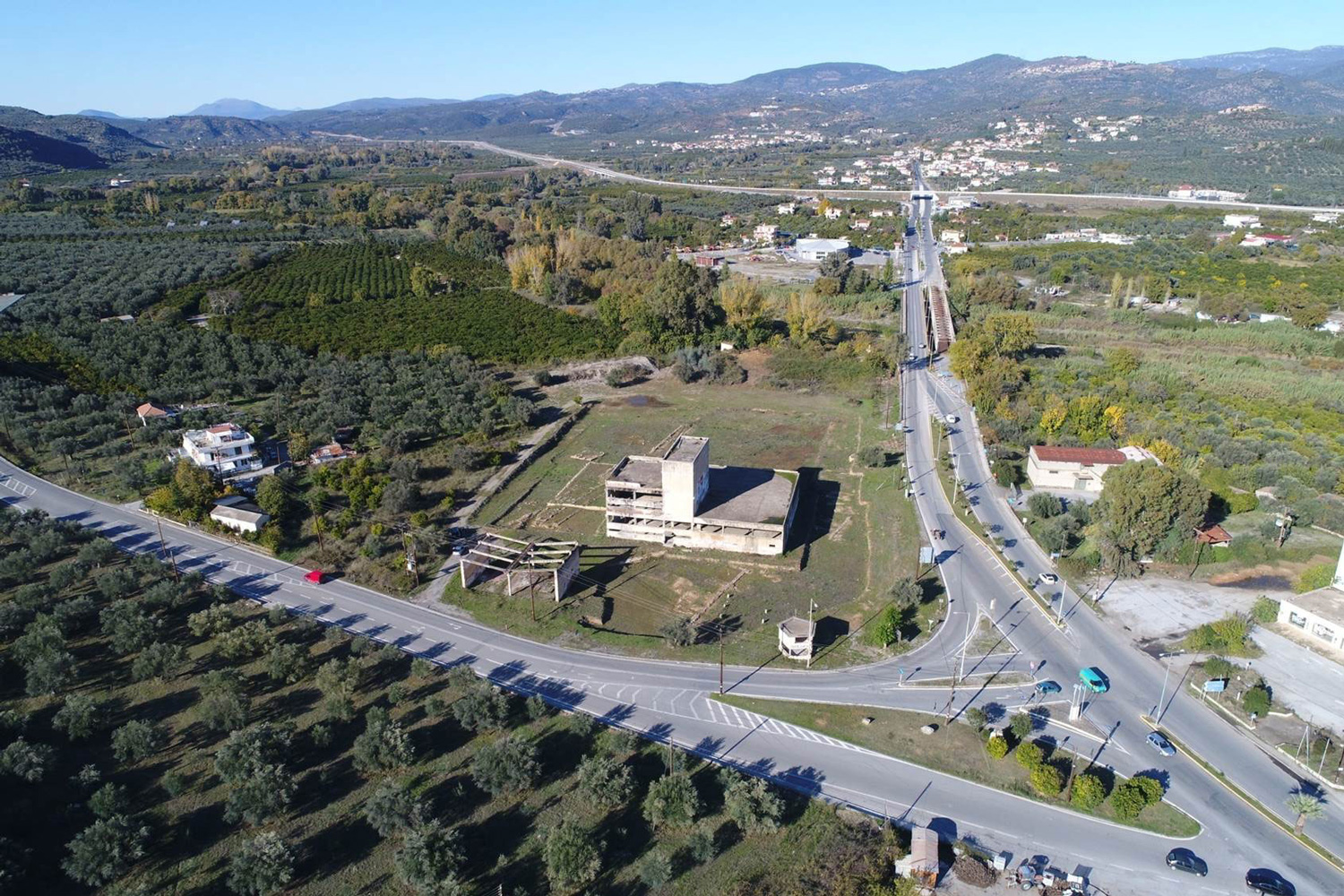 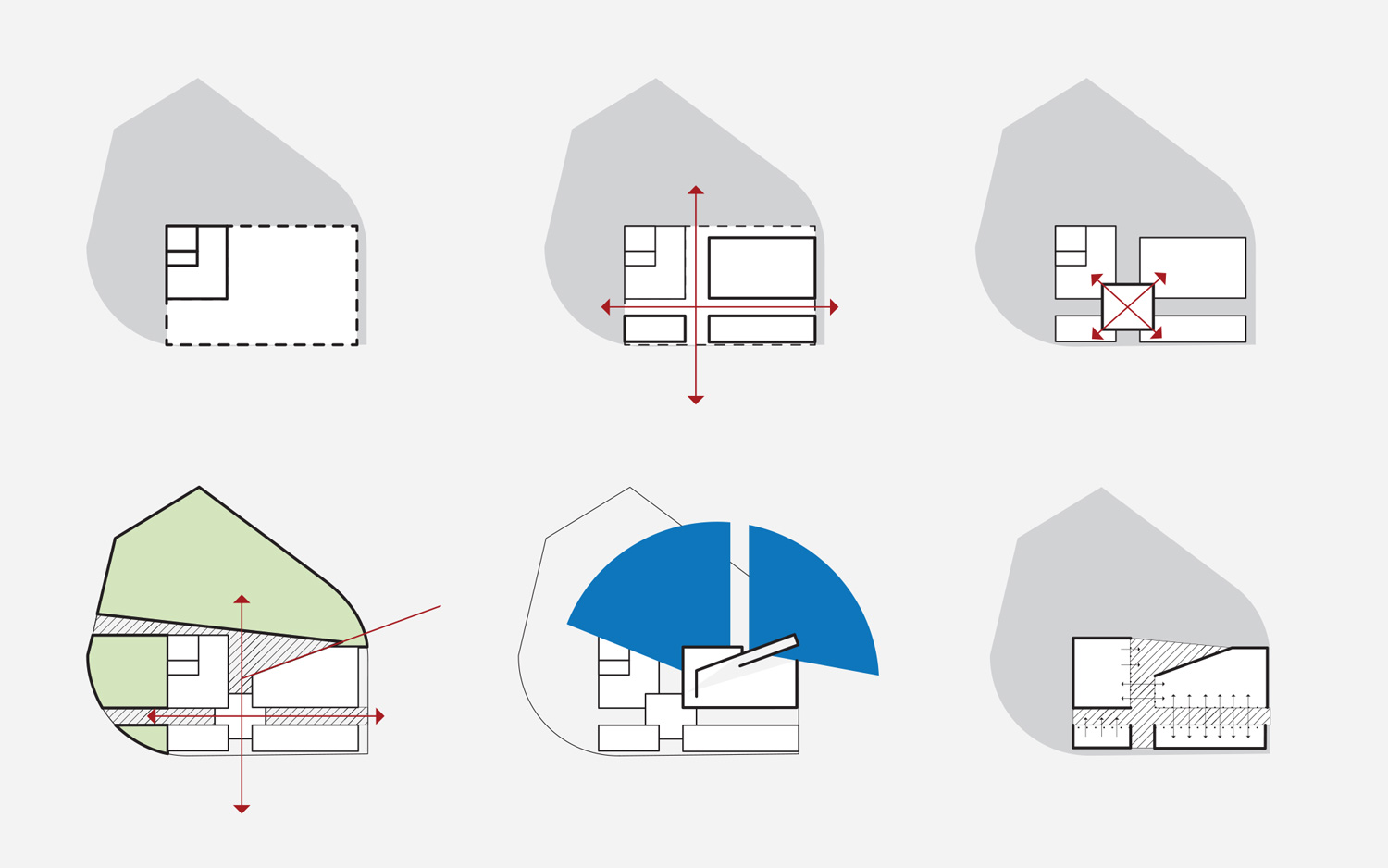 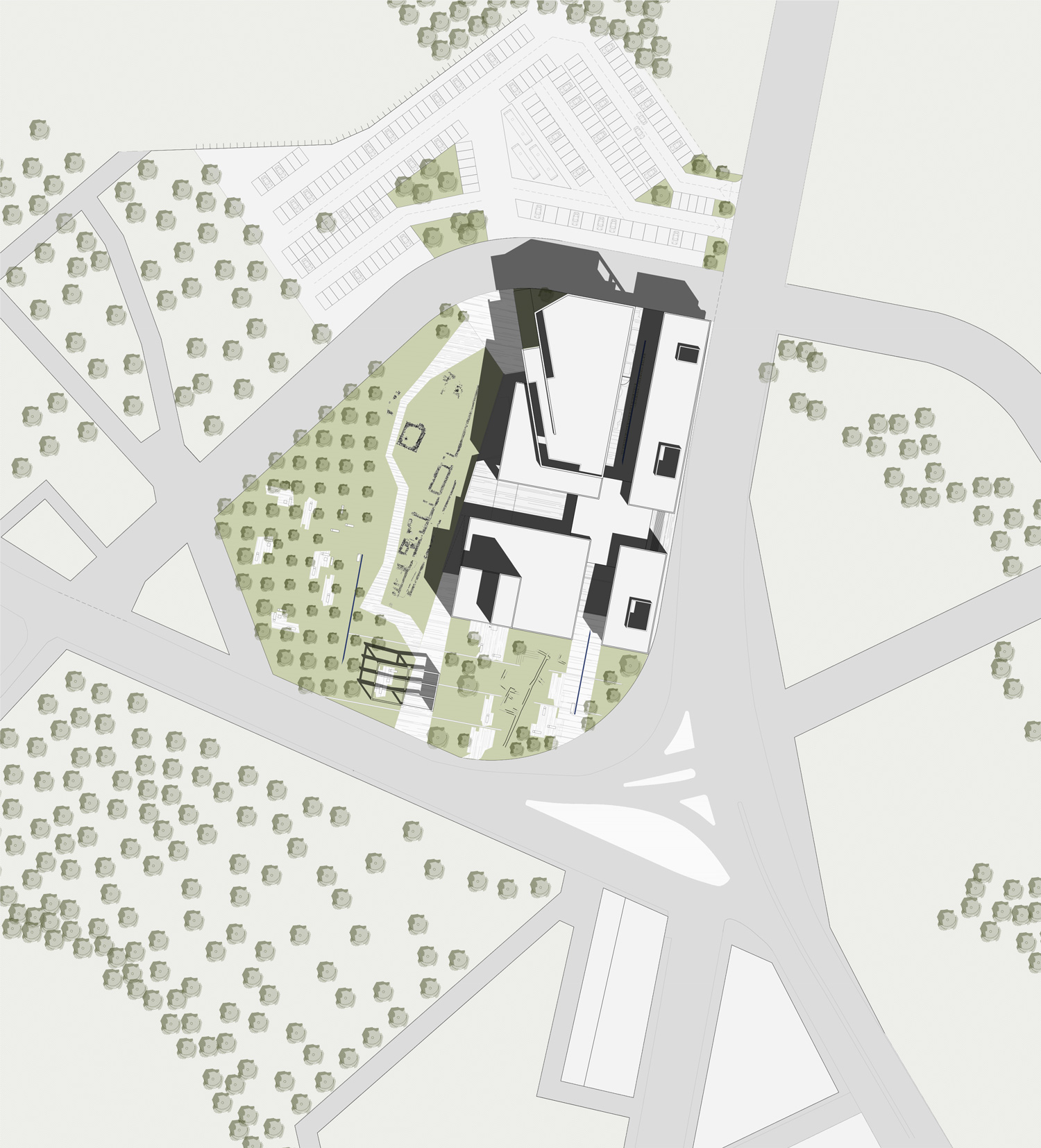 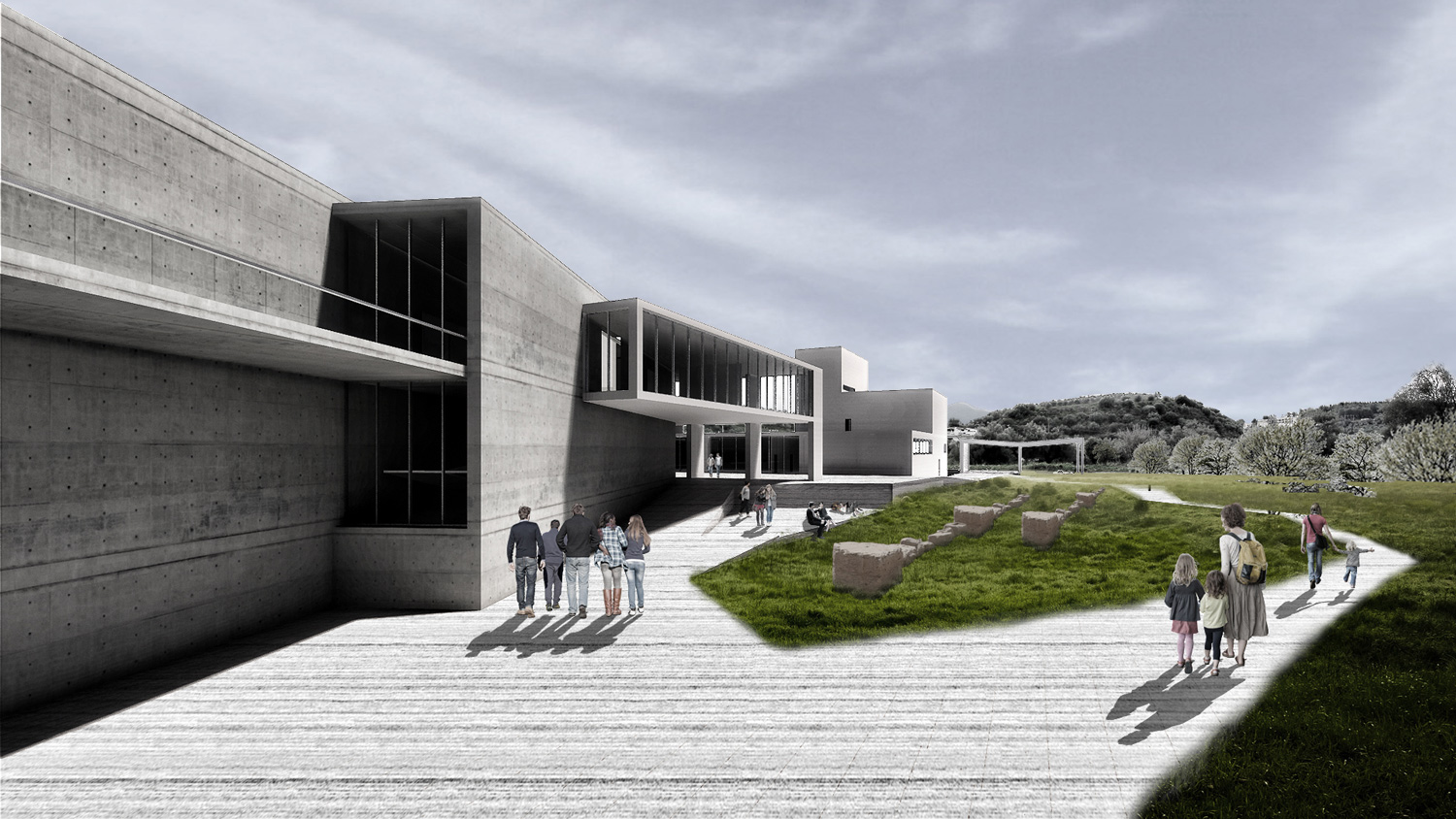 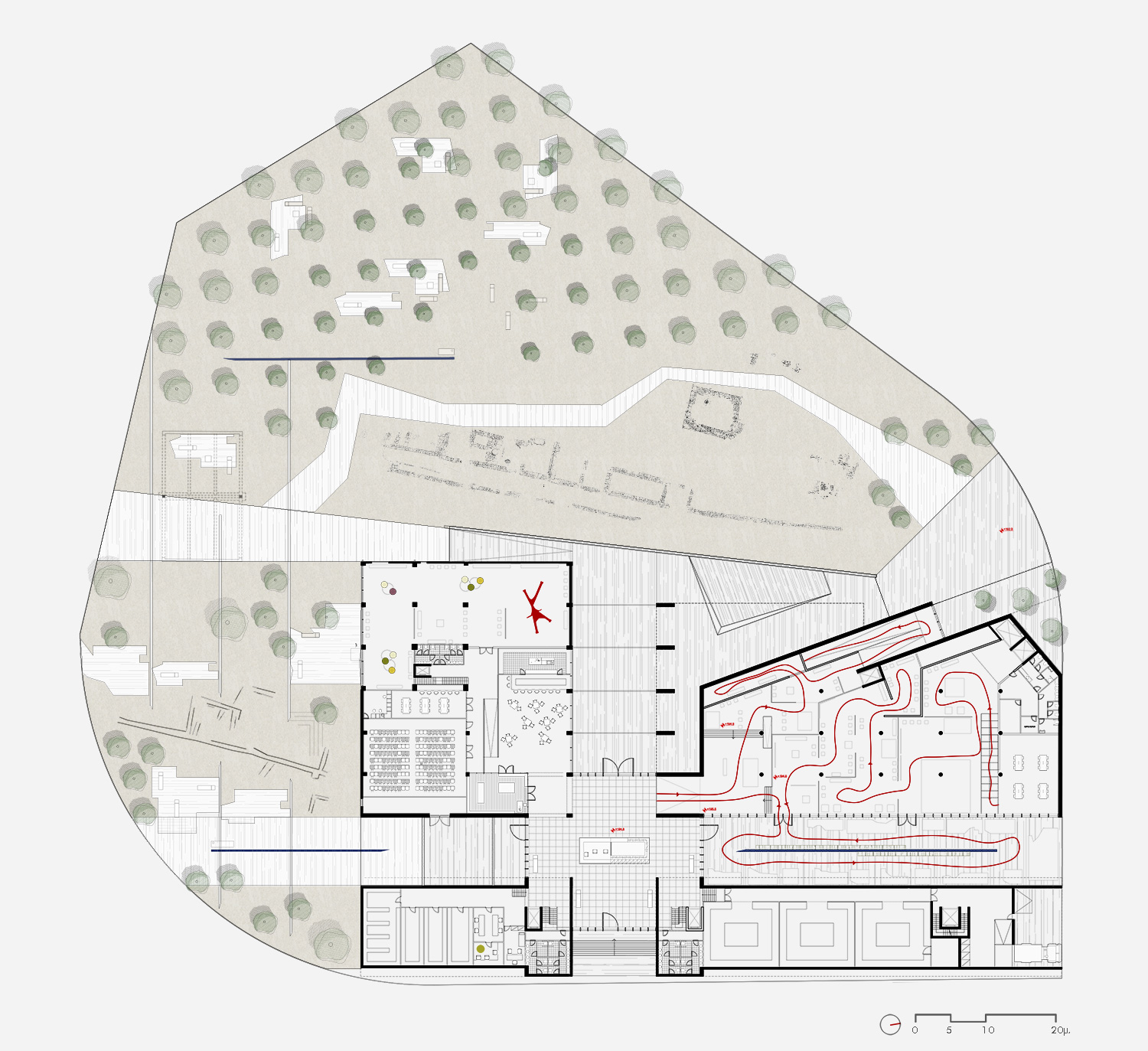 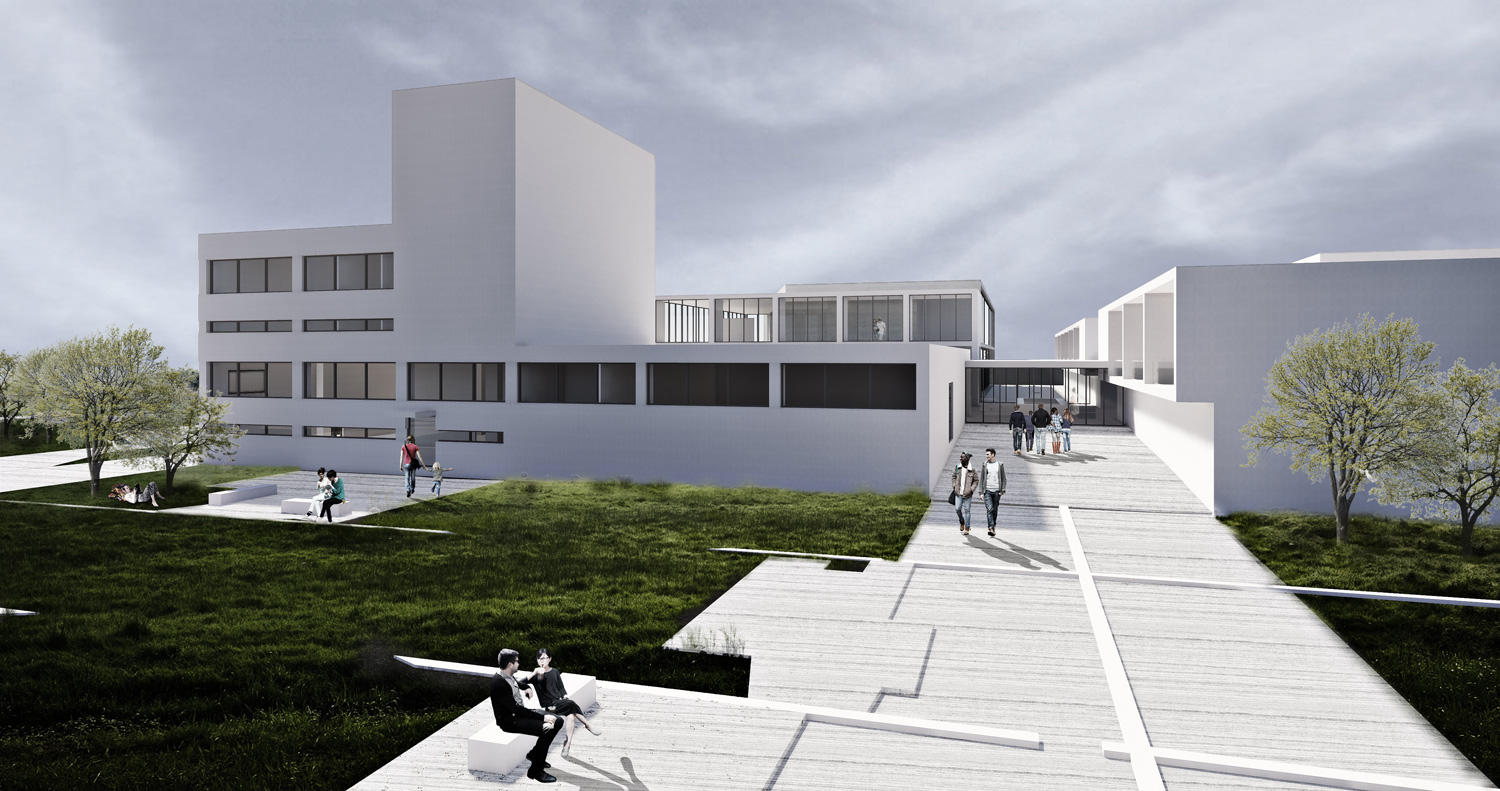 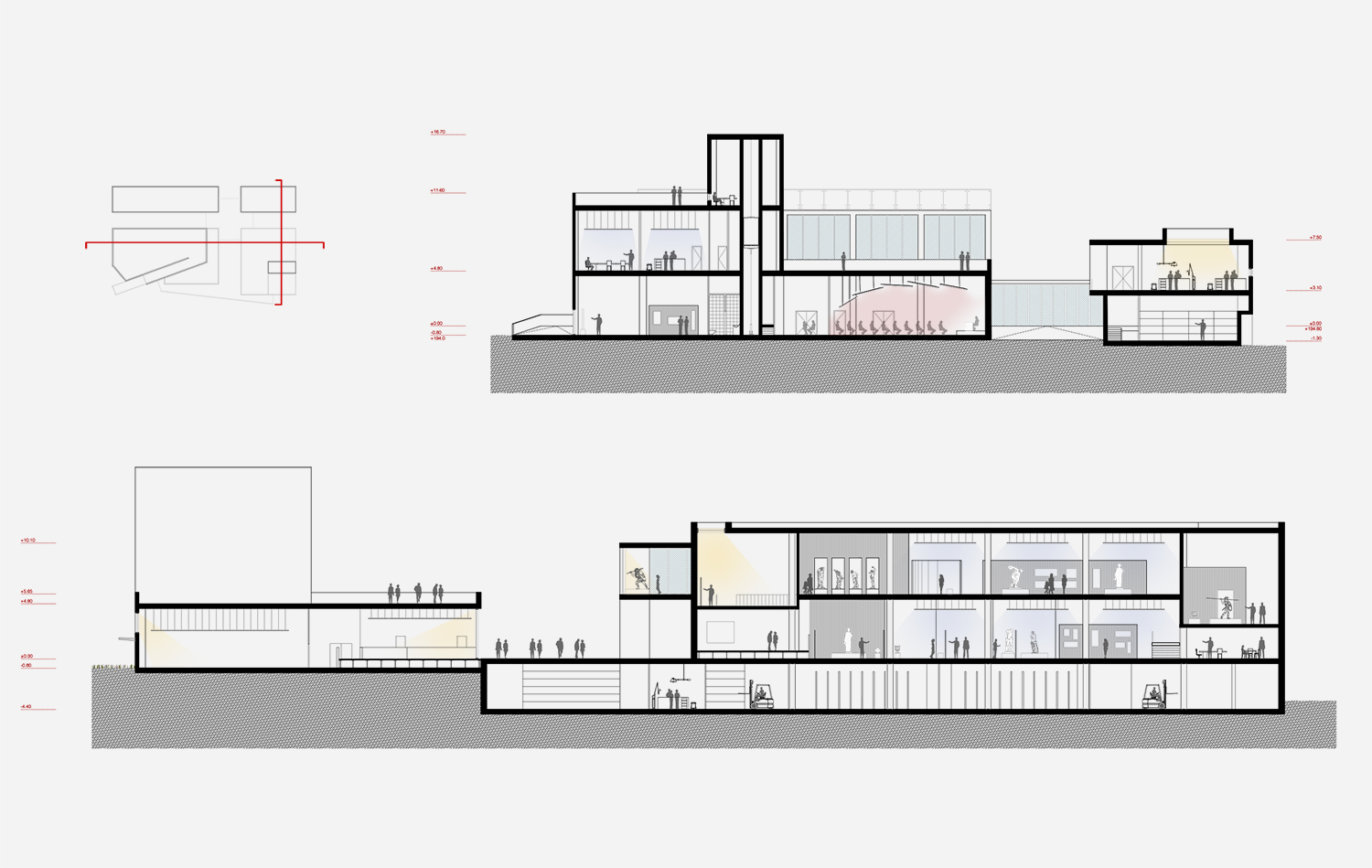 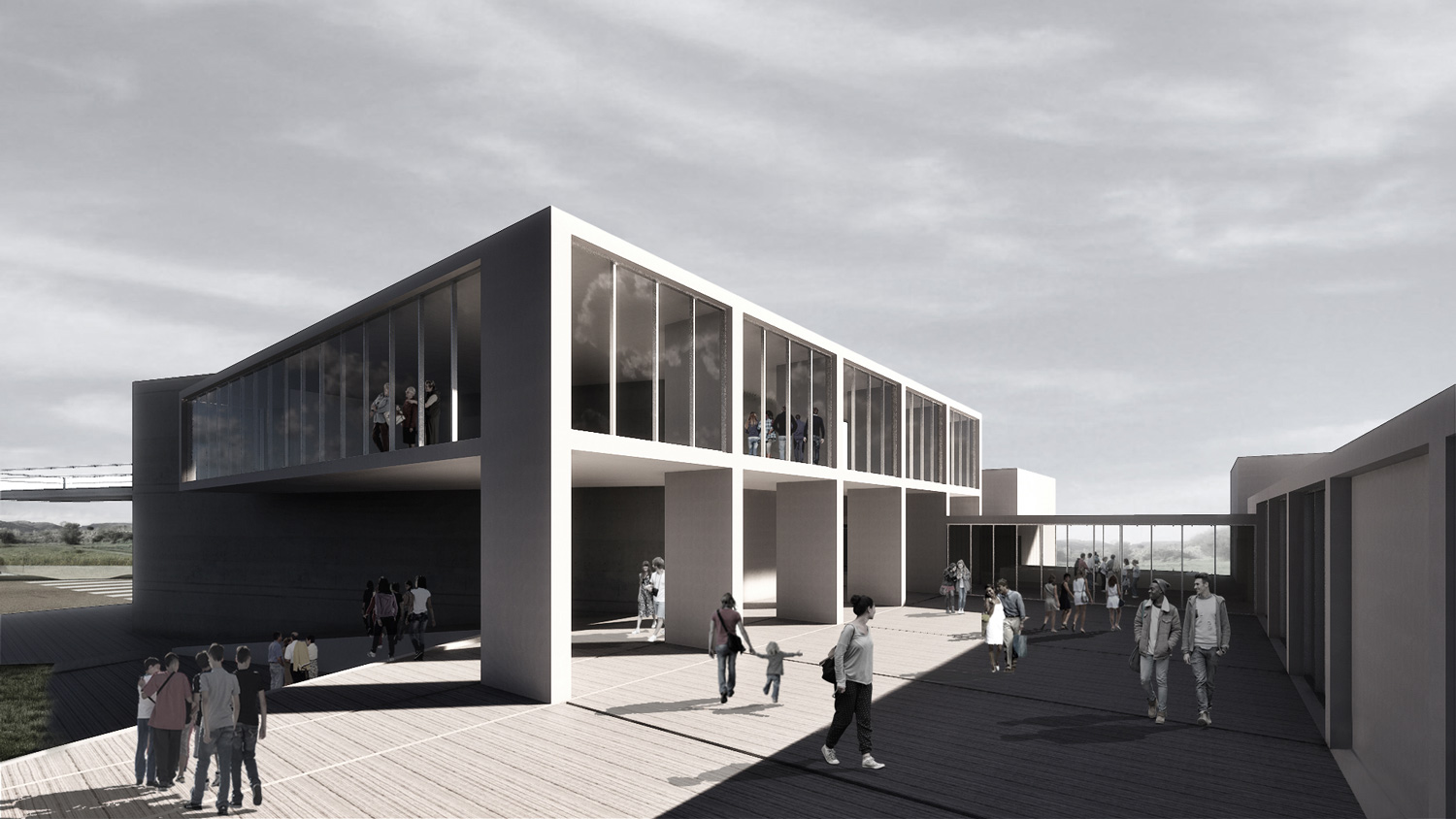 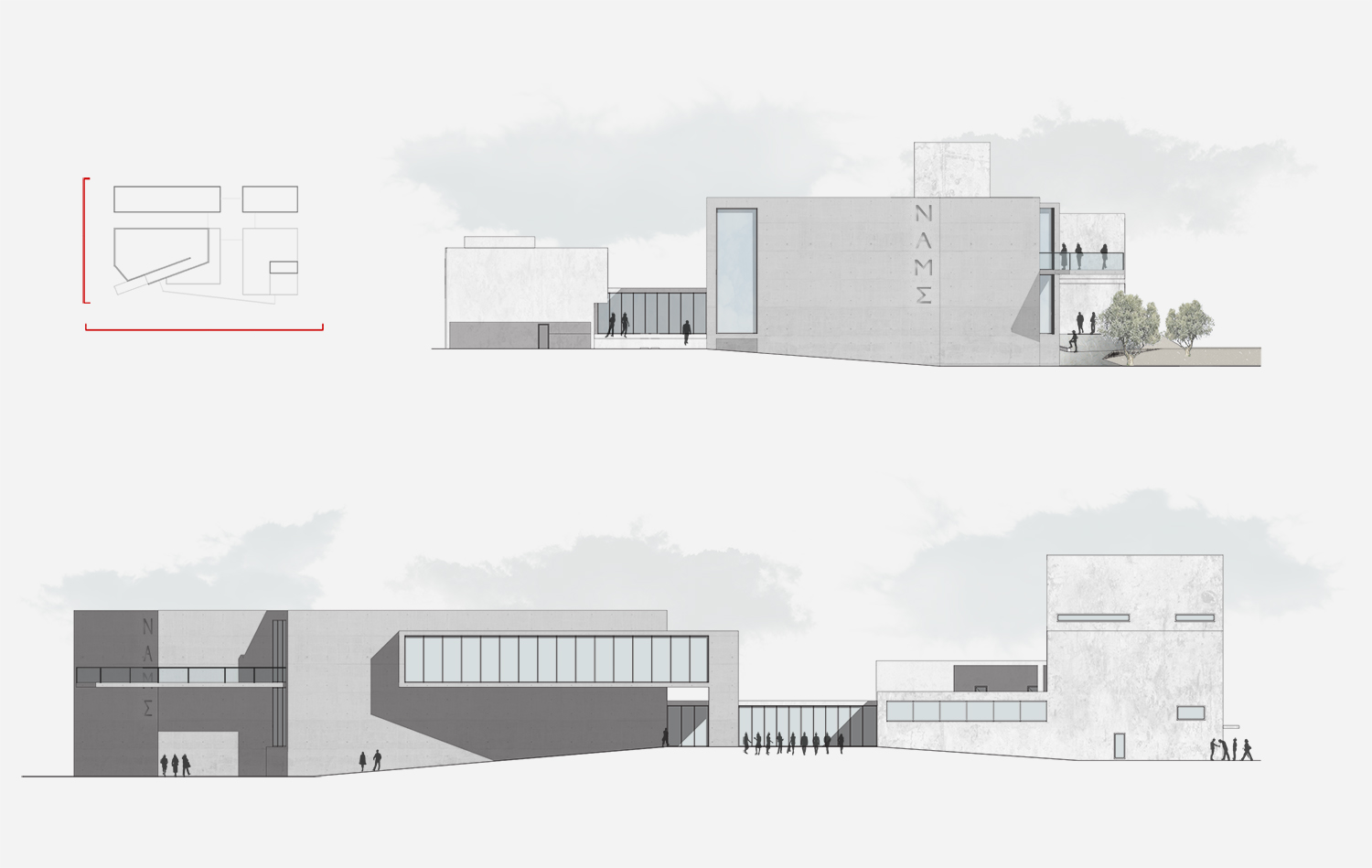 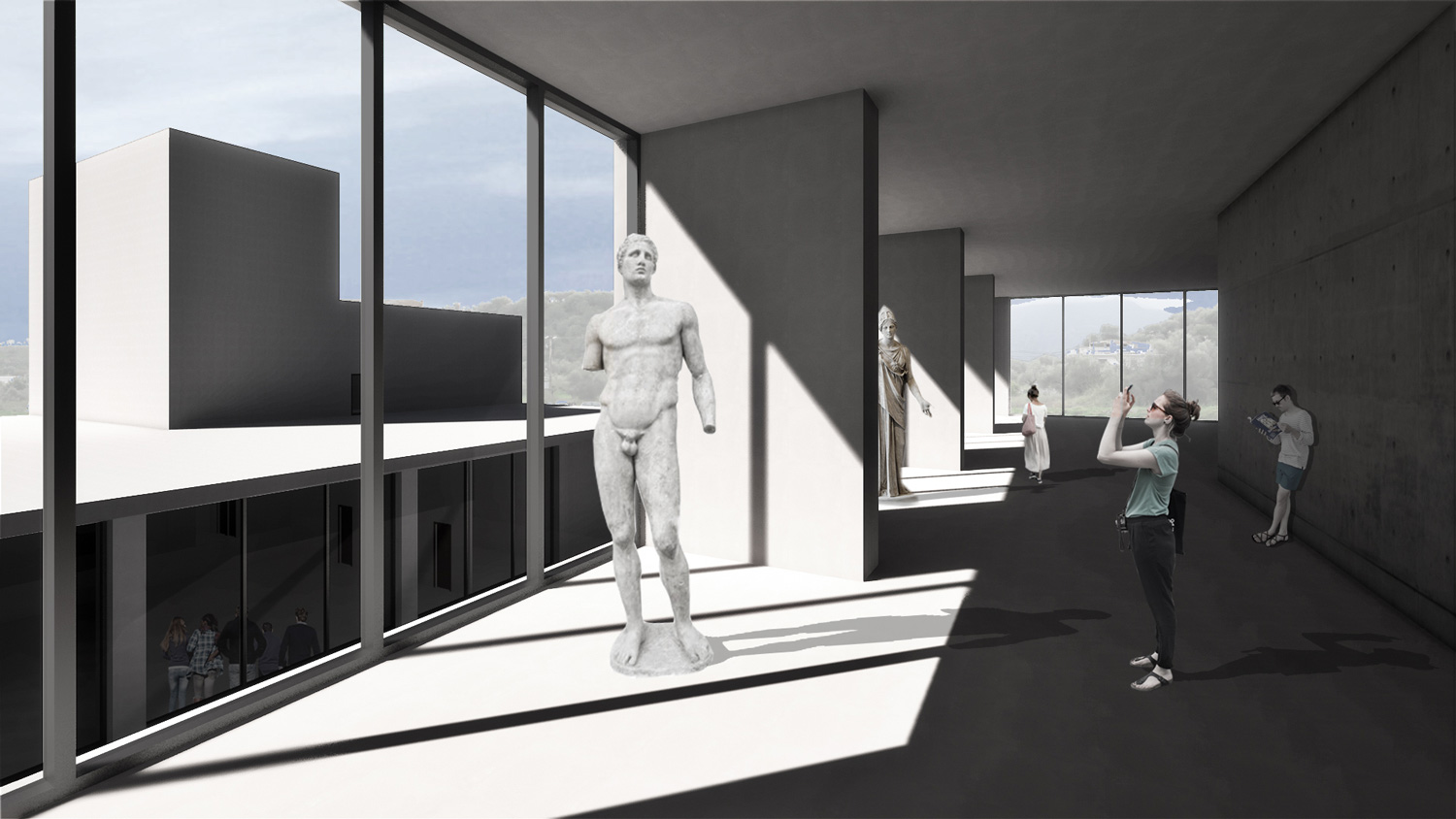 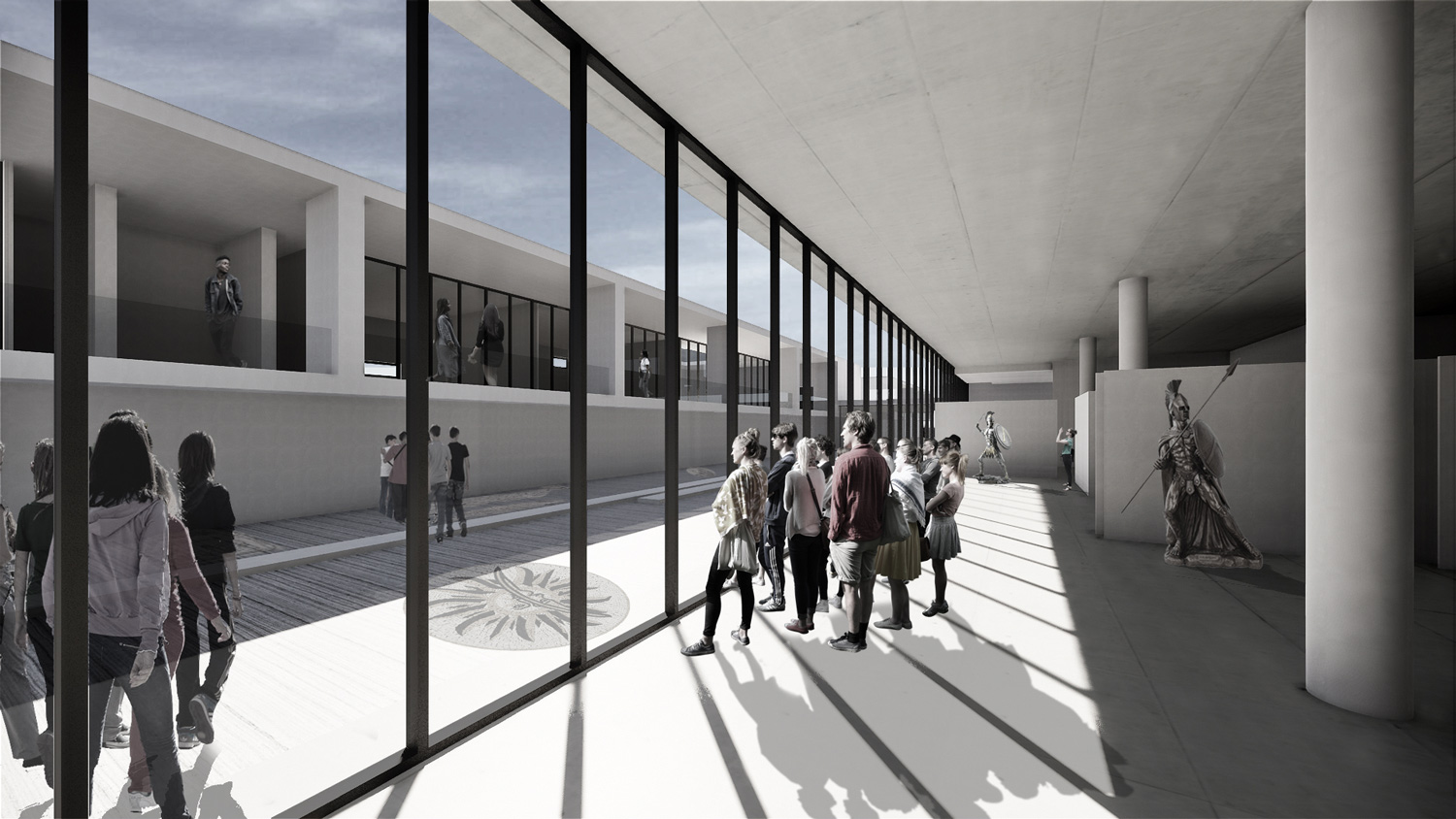 We comprehend and interpret the city of Sparta as the epitome of the laconian character. Principles such as austerity and rigor are basic synthetic starting points for the proposal. The preservable building, through its Doric volume and its simple lines, contributes in this direction as an important influence. The modern expression of the factory constitutes the pre-existing basis on which the synthetic process for the New Archaeological Museum of Sparta begins.

The architectural proposal aims at integrating different programs into a continuous whole where they coexist and appear as dynamic without one degrading the other, while maintaining their functional autonomy.

The new building, attempts its discreet presence in a secondary role without, however, losing its significance. Based on this principle, the strong form of the preservable building, through its structural grid, as a basic feature of its architectural expression, is the starting point for the structure of the new building. The new building is built on the existing grid, shaping the appropriate synthetic conditions for the morphological dialogue between the old and the new, with a clear separation of the past and the future. The complex, imitating the city of Sparta, is a living organism, with respect to its history, has a strong presence in the present.

The goal of designing the exhibition space was to compose a spatial narrative and experience of the history of Sparta during the visit to the Museum. Following the requirements of the museological premeditation, a time sequence of the predicted units and sub-units is designed based on the expression of the information and the atmosphere in each period, as well as the transitions between the periods into spatial experience. Light and dark shifts, open and enclosed spaces, mild and steep descents, stop points and panoramic views, as well as a place for educational activities, combine an intense experience and bring the visitor into a direct and personal relationship with exhibits and history.

This website uses cookies to improve your experience while you navigate through the website. Out of these, the cookies that are categorized as necessary are stored on your browser as they are essential for the working of basic functionalities of the website. We also use third-party cookies that help us analyze and understand how you use this website. These cookies will be stored in your browser only with your consent. You also have the option to opt-out of these cookies. But opting out of some of these cookies may affect your browsing experience.
Necessary Always Enabled
Necessary cookies are absolutely essential for the website to function properly. This category only includes cookies that ensures basic functionalities and security features of the website. These cookies do not store any personal information.
Non-necessary
Any cookies that may not be particularly necessary for the website to function and is used specifically to collect user personal data via analytics, ads, other embedded contents are termed as non-necessary cookies. It is mandatory to procure user consent prior to running these cookies on your website.
SAVE & ACCEPT